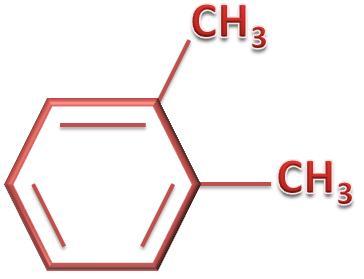 Due to the peculiarities of xylene thermodynamic equilibrium (minor change of xylene equilibrium concentration with the temperature), corrosion aggressiveness and non-regenerability of catalytic systems with high acidity, catalysts based on aluminum chloride or boron fluoride didn't get extensive industrial application.

The most widespread xylene isomerization catalysts became the ones of two types: based on amorphous or crystalline aluminosilicates, and also similar to them heterogeneous catalysts containing platinum.

Depending on xylene mixture composition and their separation method, aluminosilicate catalysts, operating at atmospheric pressure and in the temperature range from 450 to 550 °C, are used.  Over these catalysts ethylbenzene is exposed generally to disproportionation that determines short cycle length of catalyst operation.  The recommended content of ethylbenzene in isomerization feed shouldn't exceed 6–13%.  Whilst P-and O-xylene yield makes about 93 wt. %.

Platinum introduction in aluminosilicate catalyst of Engelhard Minerals and Chemicals Corporation and application of hydrogen pressure in Atlantic Richfild Company process, named  "Octafining", provide ethylbenzene conversion into xylenes up to  60–70% and cycle length from 6 to 18 months.

Application of Russian (JSC SIE Neftehim) platinized mordenite-containing catalyst IK-112 at such unit at temperature about 400 °C allows achieving approximation degree to equilibrium composition by p- and o-xylene content of 85-95 and 90% respectively, by ethylbenzene content of 50 - 70%, with total xylene yield by "once-through" scheme — 96-98%. Cycle length over this catalyst makes more than 4 years. Predecessor of this catalyst - IK-78 has been operating at orto- and paraxylene recovery unit in JSC PO Kirishineftorgsintez since 1982 up to the present.

The most large-scale process of arene isomerization is isomerization of xylenes, produced in processes of pyrolysis and catalytic reforming, toluene disproportionation and C9 aromatic hydrocarbon transalkylation. Produced in these processes para - and ortho-xylenes make a significant proportion of the total world C 8 arene output. Major quantity of these xylene isomers is used in the petrochemical industry.

Isomerization in liquid phase. The first xylene isomerization processes were carried out in the presence of Friedel— Crafts catalysts, and the best results were reached with BF3-HF system in the process of Mitsubishi Gas Chemicals company.

The process is based on the catalyst property to not only isomerate xylenes, but also to form a separated complex with meta-xylene. After decomposition of the complex with BF3–HF at 100 °C and pressure of 3.0 MPa, m-xylene is selectively isomerated into xylene mixture with the highest content of para-xylene. Para- and ortho-xylenes are separated by extraction. The amount of obtained ethyl benzene depends on its content in the feed. Because of using high-corrosion and toxic catalytic complex, despite good technical and economic performances, this process did not get wide industrial application.

Xylene isomerization processes under atmospheric pressure. These processes, introduced by the companies of Great Britain, the USA and Japan in the 50-s of the XX century, are carried out at temperatures of 420-500 °C.

XIS process of Maruzen Oil company is carried out in isomerization block in the presence of water vapor at temperatures of 450-550 °C over silica-alumina catalysts, loaded in three alternately operated reactors. The process advantage is an effective system of xylene separation, including low-temperature crystallization of difficultly separated para-xylene.

This technology allows producing about 80% of para-xylene from technical xylene, containing about 20% of ethyl benzene. Lighter and heavier aromatic hydrocarbons makes about 20%. Total capacity of this type units makes about 100 thousand tons per year.

Para-xylene is separated by low-temperature crystallization, and ortho-xylene — by rectification.

Para-xylene capacity of these ICI processes is over 260 thousand tons per year.

Xylene isomerization process was developed in VNIINP and it is operated in Novopolotsk with the capacity of 165 thousand tons of para-xylene and 165 thousand tons of ortho-xylene per year.  Over silica-alumina catalyst in alternately operated reactors reaction is carried out at temperature of 425-450 °C.  The feed, containing up to 13% of ethyl benzene, is supplied with WHSV of 0.5 h-1. Catalyst operation duration — 70–100 hours.

Separation of ethyl benzene, o-xylene and pseudocumene is provided by accurate rectification method, and of p-xylene— by low-temperature crystallization. For the purpose of technical and economic performance improvement p-xylene adsorption separation method (in Parex process) was implemented at the unit later. Amorphous silica-alumina catalyst was replaced with zeolite-containing one of KI-16M brand.

Esso Research & Engineering company process is conducted with hydrogen recycle of 3-8 moles on mole of feed under pressure of 1.4–3.5 MPa at temperatures of 380-455 °C.

Zeolite-containing catalyst, Mo- and Cr-promoted, provides cycle length of around 1 year. The best process performances are reached with ethyl benzene content in the feed of around  5%.

Platinized catalysts were found to be more effective since they provide the greatest conversion of ethyl benzene in xylene.

Octafining process  was developed by Engelhard Industries and Atlantic Richfield companies.  P- and o-xylene production complex as per this technology has been existed in Kirishi since 1976. Processing of the feed with about 26% ethyl benzene content is carried out in the process (fig. 1).

The feed is mixed with recycle hydrogen in 1: 10 molar ratio and supplied on Engelhard platinized silica-alumina catalyst with WHSV of 1.0 h-1 at temperature of 420-485 °C and pressure of 1.2–2.0.

After separation of gases and light hydrocarbons in separator, and then in rectification column, isomerate is directed for p-xylene separation by low-temperature (–34.9 °C) crystallization method.

P-xylene recovery does not exceed 60–65% of the potential, and purity is determined by conditions of the last crystallization steps, o-xylene is separated by rectification. Since 1982 the unit has been operated over IK-78 catalyst, developed in NPO Lenneftehim. Mordenite-containing catalyst IK-78 contains 0.4 wt.% of platinum, it is operated for a long time without regeneration with the increased WHSV (3 h-1). 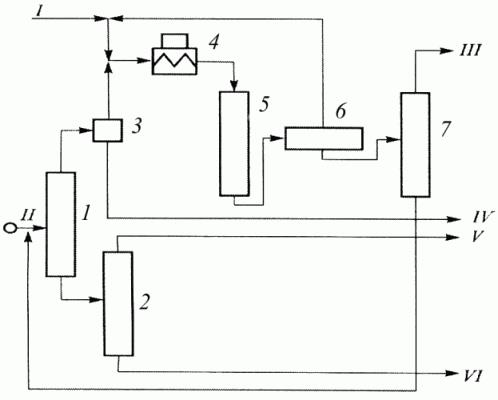 Ethyl benzene content in the feed, supplied to the unit, can reach 40%. Isomar-Parex combined unit feed can be high-aromatic reformates, products of pyrolysis and aromatization of liquefied petroleum gases.  Platinum-alumina catalyst, promoted by halogen, provides "once-through" ethyl benzene conversion of about 35%.

Parex process allows separating p-xylene with 90% depth and 99.999% purity.  70.6% of p-xylene and 19.6% of o-xylene can be obtained from xylene mixture with 25.5% of ethyl benzene content.  About 40 commercial units are operated as per UOP Isomar-Parex technology.  The cost of xylene production complex with capacity of 150 thousand tons per year is about 50 million dollars.

Since 1983 large complexes of aromatic hydrocarbon production from gasoline fractions, including also xylene isomerization and separation units as per UOP technology, have been operating in Ufa and Omsk (Russia).  It allows additionally reducing operational expenditures in p- and o-xylene production.

Information of this chapter is given exclusively for a reference purpose. You can find information about  SIE Neftehim, LLC's products and services in Developments and Services chapters.