This process is characterized by simultaneous disproportionation of several hydrocarbons, e.g., toluene and trimethylbenzenes.

During reaction of arenes transalkylation the migration of alkyl group from the molecule of one aromatic compound to the molecule of another hydrocarbon takes place. For example, toluene forms benzene and xylene.

In addition, the reaction of m-xylene and C9 aromatic hydrocarbons isomerization takes place.

Approximate material balances (in % wt.) of disproportionation and transalkylation processes with recycle of unreacted C7 and C9 aromatic hydrocarbons correspondingly are shown below:

The processing scheme may be used depending on the requirements to the aromatic hydrocarbons, and also toluene and trimethylbenzenes (С9Н12) resources using isomerization, disproportionation and transalkylation processes over zeolite catalyst without noble metal. The hydrodealkylation process is also possible to apply.

Thermodynamic dependencies of methylbenzenes disproportionation and transalkylation reactions have been studied by many authors. Fig. 1 shows the dependency of benzene, toluene, dimethyl- and trimethylbenzenes contents at the temperature of 477 °C. The equilibrium was stated to change insignificantly in the case of temperature variation in the range of 300-600 °C. 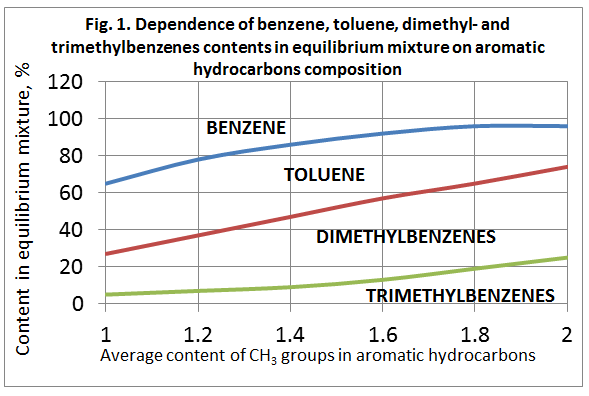 Using toluene as initial feed maximal depth of its “once through” conversion cannot exceed 58%.

The ratio of produced benzene and xylenes may be controlled by changing the initial feed composition that significantly increases the flexibility of disproportionation unit. Chlorinated aluminum, hydrogen fluoride, boron trifluoride, alumina, and amorphous and crystalline aluminosilicates have been studied as disproportionation catalysts. In petrochemical industry only heterogeneous catalysts have been applied. Disproportionation process may be carried out at the atmospheric pressure and under hydrogen pressure. 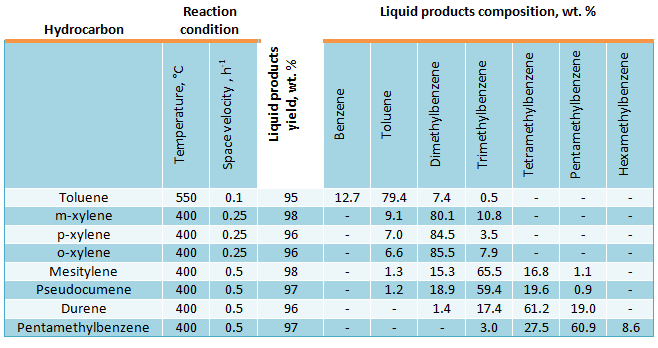 Taking into account the insufficiently high activity of amorphous aluminosilicates, the disproportionation reactions were conducted in the presence of crystalline aluminosiliates – zeolites (Morita Y., J. Japan Petrol. Inst., 1967, vol. 10, No. 7, pp. 429-435, Morita Y., J. Chem. Soc. Japan, 1967, vol. 70, No. 8, pp. 1363-1372). Studies of different cationic forms of X- and Y-types zeolites showed that their multivalent forms are catalytically active in disproportionation reaction of alkylaromatic hydrocarbons. The X-type zeolites (molar ratio SiО2 : Аl2О3 = 2,5) and Y-type zeolites (molar ratio SiО2 : Аl2О3 = 5) with different degree of exchange of sodium ion for calcium ion have been studied in detail (Isakov Ya.I., Minachev Kh.M., “Petroleum Chemistry”, 1967, vol. 7, No. 4, pp. 561-568; Isakov Ya.I., Minachev Kh.M., “Petroleum Chemistry”, 1967, vol. 10, No. 6, pp. 805-812). It was stated as a result that in the case of increase of exchange degree of sodium for calcium in X-type and Y-type zeolites, the catalyst activity rises. In both cases the best results were obtained with exchange degree of 90 %. 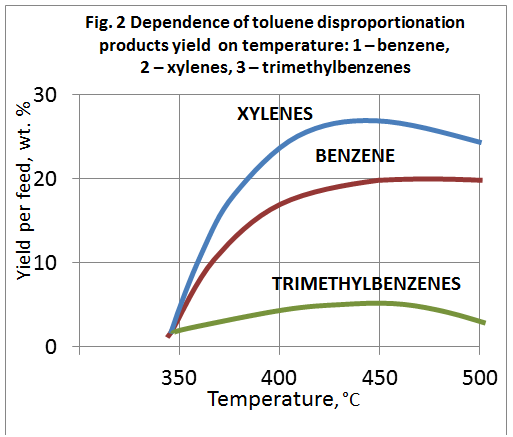 Effect of process parameters to toluene disproportionation over CaY catalyst was studied in the work of Mortikov E.S., etc., “Petroleum refining and petroleum chemistry”, 1972, No. 2, pp. 31-34. To improve strength and formability 30% of alumina is introduced into CaY zeolite. Study of temperature effect on disproportionation reaction showed that toluene conversion reaction begins to take place effectively at the temperature of 350 °С, pressure of 1.5 MPa (15 kgf/cm2), feed space velocity of 0.6 h-1. Maximal disproportionation products yield was observed at 450-500°C (fig. 2). Composition of resultant xylenes was the following (in wt. %): paraxylene – 24; metaxylene – 50; orthoxylene – 26; the trimethylbenzenes composition (in wt. %): mesitylene – 21; pseudocumene – 69; hemimellitene – 10. 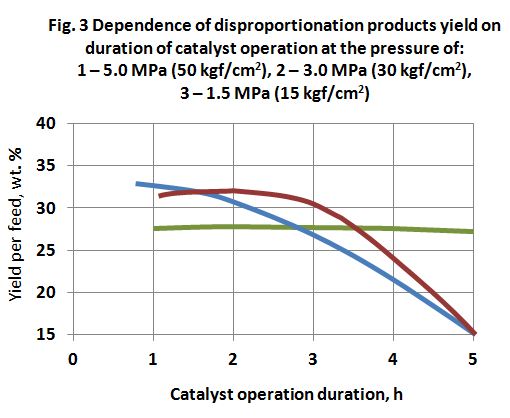 As a result of performed works the following toluene disproportionation process conditions over CaY catalyst are recommended: temperature of 450 °С, feed space velocity of 0.6 h-1, pressure of 1.5 MPa (15 kgf/cm2), operation duration of 5 h, after that it is necessary to carry out oxidative regeneration of the catalyst. In this conditions the products yield is the following (in wt. %): benzene – 20-22; xylenes – 30-31; trimethylbenzenes – 4-5; coke – 1-3; gas products – 1-2.

RZH catalyst was studied in toluene disproportionation (in liquid phase process) at 290 °c, 4.5 MPa (45 kgf/cm2) and 1.4 h-1 (US Patent 3377400, 1968; Grandio P., et al., Preprints General Papers Division of Petrol. Chem. Inc., 1971, vol. 16, No. 3, pp. 78-88). This catalyst is also applied in xylenes isomerization process, but isomerization reaction is carried out at lower temperature. Application of liquid phase allowed to considerably lengthen the non-regenerative service life of the catalyst without hydrogen using in the process. Toluene disproportionation results over RZH catalyst at the given conditions are shown below (in wt. %) (Grandio P., et al., Hydrocarb. Proc., 1972, vol. 51, No. 8, pp.85-86):

Liquid phase disproportionation process is characterized by high selectivity of toluene conversion — trimethylbenzenes yield is about 2 %.

Disproportionation process under hydrogen pressure allows to decrease carbon deposition on the catalyst and increase duration of non-regenerative catalyst operation.

Study of the catalysts in transalkylation reaction of aromatic hydrocarbons mixture (84.8 mol. % of toluene and 15.2 mol. % trimethylbenzenes) under pressure of 3 MPa (30 kgf/cm2), space velocity of 1 h-1 and H2 : HC molar ratio = 8, showed that decationated mordenite was found the most active and selective catalyst (Belgian Patent 716016, 1969):

Behavior of toluene disproportionation reaction under hydrogen pressure was studied over zeolite catalysts (Bursian N.R., et al., “Chemistry and Technology of Fuels and Oils”, 1974, No. 5, pp. 8-10).

Results of toluene and trimethylbenzenes transalkylation reaction over decationated mordenite at the temperature of 410 °C, pressure of 3 MPa (30 kgf/cm2), space velocity of about 0.7 h-1 and hydrogen flowrate of 800 m3/m3 per feed are shown below (Belgian Patent 716016, 1969):

Xylenes has the following composition, resultant from toluene disproportionation and toluene and trimethylbenzenes transalkylation reactions (in mol. %): ethylbenzene – 0.8-1.1; paraxylene – 21.7-23.7; metaxylene – 51.0-54.4; orthoxylene – 22.8-24.5. Xylenes concentration is close to thermodynamically equilibrium concentration of dimethylbenzenes. It results from isomerization activity of decationated mordenite. So, the composition of the resultant xylenes in disproportionation reaction after addition of 20 vol. % of metaxylene to toluene was the following (in mol. %): ethylbenzene – 1.0; paraxylene – 23.0; metaxylene – 52.0; orthoxylene – 24.0.

In transalkylation processes to increase xylene to benzene yield the aromatic hydrocarbons C9, produced in catalytic reforming of gasolines, are involved into reaction. Among these aromatic hydrocarbons C9 besides trimethylbenzenes the great amount of ethyltoluenes is contained. In this case the ethylbenzene content in xylenes, produced in the transalkylation process, will be slightly increased. It is connected with reaction chemistry: 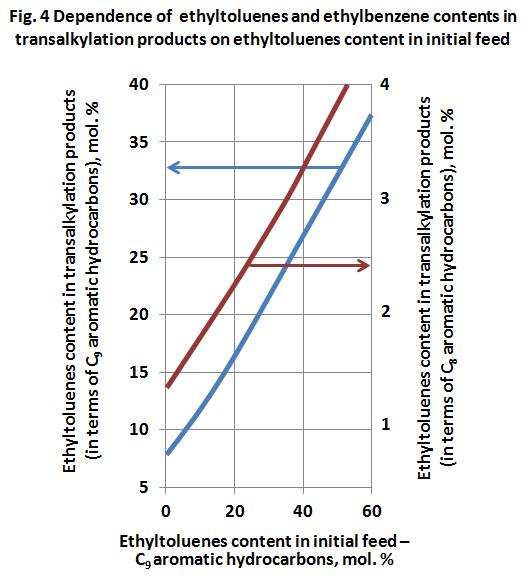 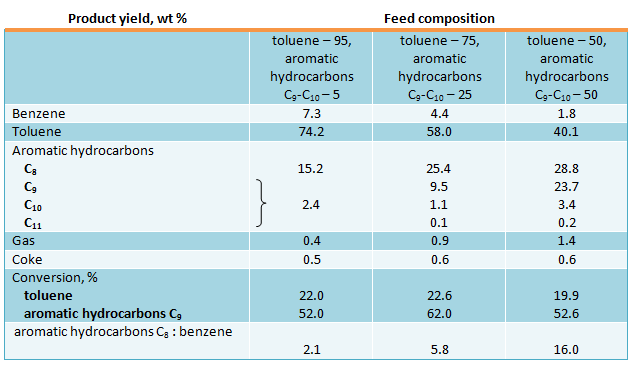 Xylene Plus process is performed under atmospheric pressure over dynamic-bed granulated catalyst in a system with separate reactor and regenerator. Operating modes of the commercial units are not disclosed. Liquid products composition of the recycle process is the following (vol%) (Verdol I.A., Oil a. Gas J., 1969, vol.67, №23, pp. 63-66):

Original feed – toluene – is mixed with recycle hydrogen gas, then it is heated in furnace and is fed to reactor. Reaction products are separated in HP gas separator. Gas phase goes to recycle compressor suction, and liquid phase is stabilized and treated with clay. Further the products are rectified to recover benzene, toluene, xylenes, and trimethylbenzenes. Benzene and xylene recovered from the liquid products are commercial products. Toluene and trimethylbenzenes are mixed with the feed. In order to increase xylene production, a mixture of С9 aromatic hydrocarbons produced by catalytic reforming may be added to the feed. 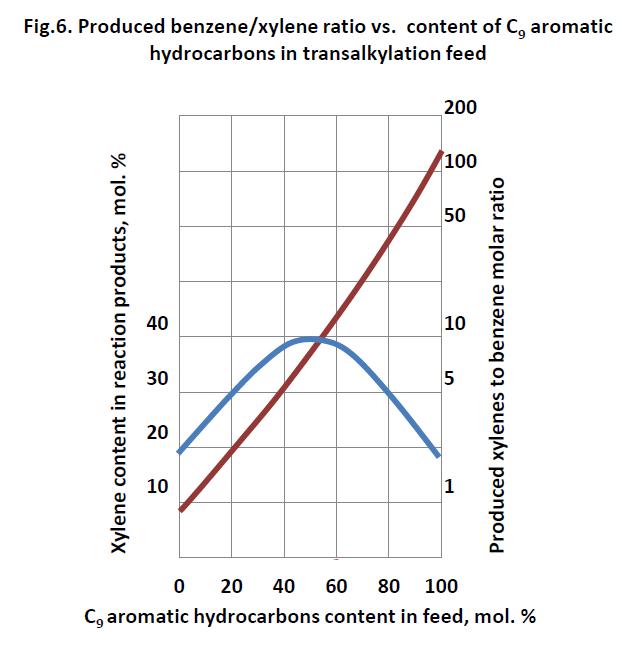 Properties of benzene and xylene produced by disproportioning are the following: 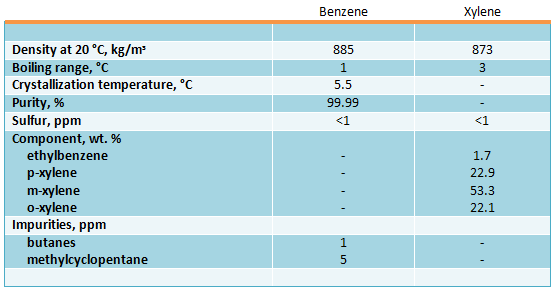 Tetorey process is used on disproportioning and transalkylation commercial unit in Kawasaki (Japan) with toluene production capacity of 70 KTA, and Xylene Plus process is applied on a commercial unit in Houston (Texas, USA) with feed capacity of 120 KTA. Consumption parameters of toluene disproportionation processes per 1 ton of original feed are as follows (Verdol I.A., Oil a. Gas J., 1969, vol.67, №23, pp. 63-66; Hydrocarb. Proc., 1972, vol.51 №8, pp. 85-86):