Oil refining (crude distillation) is the process of separating it to fractions according to boiling temperature (fractionation) underlying oil processing and production of motor fuel, lube oil and other valuable  chemical products.

Several basic conditions are required for oil separation into components: oil must be heated to the temperature providing not only heating, but also oil part evaporation. It means that oil must be evaporated in furnace once and depleted products must be utilized while heating crude oil. For these purpose tube furnaces, heat-exchangers and rectification columns are used.

Refining with rectification is the most popular mass-transfer process in chemical and oil-and-gas technology implemented in rectification columns by multiple counterflow vapor and liquid contacts.

Rectification column operating scheme is shown in the picture 1. 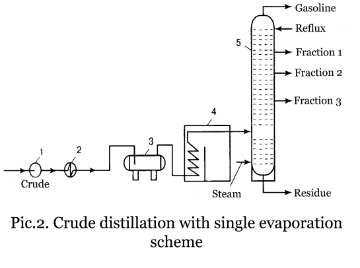 Oil refining (crude distillation) with single evaporation is implemented up to the following scheme (picture 2). Crude oil heated in heat-exchangers 2 due to heat of unit effluent is supplied by the pump 1 for dehydration and desalting to the electric dehydrators 3, and then – to the tube furnace 4, where its single evaporation occurs, and from furnace – to atmospheric column 5, where separation into needed fractions is implemented. Such process scheme of oil refining (crude distillation) is usually used for oils with the low content of light oil products and minor content of dissolved gas.

According to this scheme combined evaporation of light and heavy fractions promotes temperature reduction of oil heating before bringing it to column.

Using this scheme for oils with major content of dissolved gas and low-boiled fractions can cause difficulties due to pressure increase in the feed pump and all the apparatuses upstream the furnace, in the furnace and in the rectification column, that requires larger metal consumption because of the necessary equipment walls thickening and will cause unavoidable rectification impairment.

In this case double oil evaporation and two rectification columns scheme is used (picture 3). In the first column light gasoline and gas are produced. It decreases general pressure in the system and pressure in the main rectification column. It results in more complete separation of light oil products and  more precise fractionation in the column. 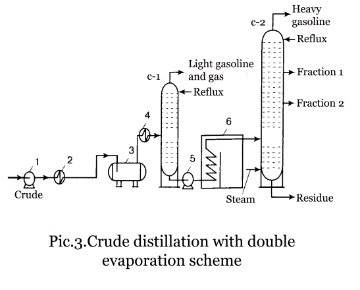 Crude oil is collected by the pump 1 and brought for dehydration and desalting to the electric dehydrators 3 via the heat-exchangers 2. Dehydrated and desalted oil goes through the second group of heat-exchangers 4, is heated up to 210-220 oC and enters the fist rectification column C-1, where light naphtha and gas fraction are produced. The rest of oil from column C-1 is collected by the hot pump 5, is heated up to 340-360 oC in the tube furnace and enters the second rectification column C-2, where the rest of needed fractions are produced. In case oil is not hot enough before it enters the column C-1 there is an opportunity to bring a part of reduced oil heated in the furnace 6 to the bottom of column C-1 in a hot jet form. This scheme requires higher heating temperature in a furnace in comparison with the single evaporation scheme due to separate evaporation of low-boiling and high-boiling fractions. All the modern CDU units basically work according to the double evaporation scheme.

The scheme of atmospheric oil distillation on the modern CDU and CVDU units is shown in the picture 4.

Preliminarily dehydrated and desalted on electrical desalting unit (EDU) block of CDU or CVDU unit, oil is brought by the pump 1 to the heat-exchangers 2 for heating up to 220-230 oC and then – to the column C-1. In the evaporating space of this column oil is separated to vapors and non-evaporated residue draining down to the column bottom through the trays. 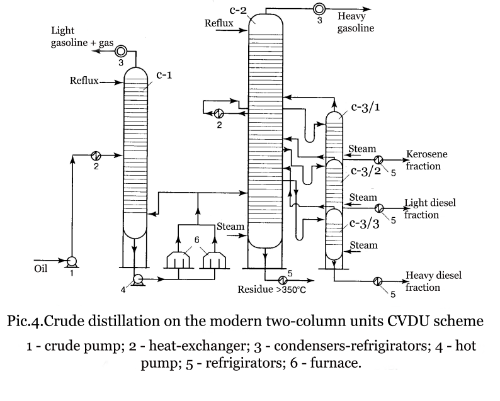 Secondary gasoline distillate processing is either an independent process or a part of the combined unit on the refinery. Secondary gasoline distillate processing units on the modern refineries are used for obtaining narrow cuts of distillate. Then these cuts will be used as catalytic reforming feed (catalytic reforming is the process for producing individual aromatic hydrocarbons: benzene, toluene, xylene, or gasoline with higher octane number). While producing aromatic hydrocarbons primary gasoline distillate is separated to fractions with the following boiling ranges: 62-85 oC (benzene), 85-115 (120) oC (toluene) and 115 (120) – 140 oC (xylene).

Fraction 120-140 oC is pumped from the bottom of the external stripping column. This fraction is coming to the reservoir after cooling in heat-exchangers and apparatuses.

The bottom column product (fraction 140-180 oC) is also pumped through the heat-exchanger and the apparatus to the reservoir. Heat that is necessary for the distillation sections of the rectification columns operation is fed by the boilers. An external stripping section is operated by a boiler. Corresponding recycles are pumped to the boilers. Steam is used as heat-transfer agent for the boilers.

There are 60 trays in each rectification column.

Unit material balance depends on potential content of narrow cuts in the gasoline distillate and on rectification accuracy.