Isomerization is  the process by which one isomer is transformed into another one. 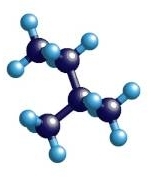 Isomerization leads to production of a compound with another atomic (group) arrangement but composition and molecular weight do not change. In literature isomerization is often called rearrangement, sometimes these are name reactions (isomerization processes) according to the tradition.

Isomerization process is aimed at production of high-octane components of commercial gasoline from low-octane oil fractions by structural change of carbon skeleton.

Isomerization reactions are possible due to isomery – a phenomenon that consists in existing of several compounds with equal molecular weight, quantitative and qualitative composition, but with different physical and chemical characteristics. Such compounds are called isomers. For example, there are 5 basic hexane isomers, 3 conformation isomers of cyclohexane apart from methylcyclopentane, 17 hexene isomers. Octane has 18 isomers and tetradecane has as much as 1818 isomers.

There are two main types of isomery: structural and spatial (stereoisomery).

Isomerization reactions are used extensively for production of both lower and higher paraffins (isoalkanes).

Isopentane and isobutane are valuable feed for synthetic rubber production. Isobutane is also used for alkylbenzene, high-octane ethers production, methyl-tret-butyl ether (MTBE) is the most popular of those.

The following types of reaction are typical for isomerization process:

There are other several important reactions besides paraffin isomerization reaction.

In the course of gasoline isomerization, rings opening reaction proceeds faster with temperature rise. For typical conditions in an isomerization unit reactor, at naphthene rings opening with creation of paraffin hydrocarbons conversion level is about 20-40%.

Naphthenic hydrocarbons methylcyclopentane and cyclohexane are at equilibrium.

In case of temperature rise, equilibrium shifts to methylcyclopentane formation side.

Benzene hydrogenation reaction runs very fast at very low temperatures with heat release. The amount of released heat limits benzene content in feed supplied to a unit. Feed supplied to the isomerization reactor block must contain no more than 1 wt.% of benzene.

The isomerization process is one of the most profitable ways to produce high-octane components of gasoline with improved ecological characteristics. Isomerization units importance has also increased with introduction of new ultrahard limiting requirements for motor gasoline ecological characteristics including fractional composition, aromatic compounds and benzene content limitation. Isomerization units allow producing fuel with characteristics, complying with the strict standards EURO-4 and EURO-5. An intensive growth of isomerization process capacity is implemented due to of existing units revamp and building of grass-root units. Revamp and intensification of operating isomerization units to processes with recycle of unreacted normal paraffins are being done simultaneously. Light naphtha with EBP 62-85 oC is isomerization feed. Octane number increases due to increase of isoparaffins amount. As a rule, the process occurs in one or two reactors at a temperature 110-380 oC and the pressure up to 35 atm (depends on applied technology).

An isomerization unit is represented by a process system, consisting of blocks interconnected by process streams:

Zeolite catalysts display activity at higher temperatures comparing with catalysts of the other types and, therefore, low octane numbers of isomerate (76-78 RON). However, they have high resistance to poisons in feed and ability to regenerate in unit reactor completely. In the technological scheme of this process fire heaters for gas-feed mixture heating up to reaction temperature are provided. Sufficiently high hydrogen to hydrocarbon feed ratio is required (along with isomerization hydrogen is spent for feed dearomatization), therefore a compressor for recycle hydrogen gas supply and a separator for hydrogen gas separation are necessary (picture 1). 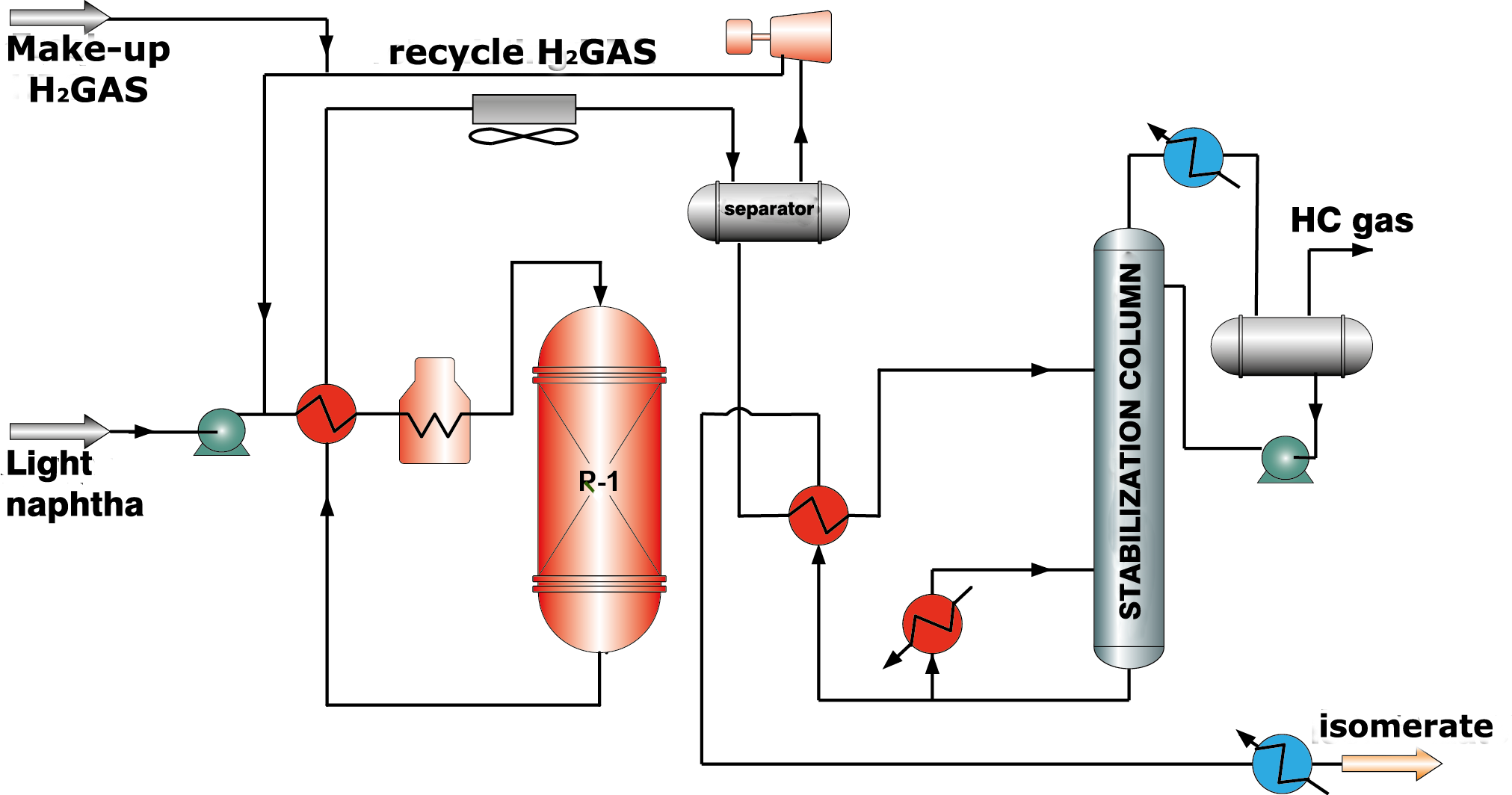 Catalysts based on chlorinated alumina

Catalysts based on chlorinated aluminum oxide are the most active and provide high yield and octane number of isomerate. It is necessary to say that during isomerization such catalysts loose chlorine, as a result activity decreases. Therefore, injection of chlorinated compounds (usually CCI4) into feed is provided to maintain high catalyst activity. After that caustic treatment to remove organic chlorine in special scrubbers is necessary. A big disadvantage is that this type of catalyst is very sensitive to catalytic poisons (oxygen-containing compounds, water, nitrogen, sulfur, metals) and requires very accurate feed preparation (picture 2).  Chlorinated catalysts do not regenerate, and their service life is 3-5 years.

Catalysts based on sulfated metal oxide

Catalysts based on sulfated metal oxide (oxide catalysts) have become popular recently, because they combine high activity and resist to catalytic poisons action, are able to regenerate. As well as for zeolite catalysts, there is a need for compressor to supply recycle hydrogen gas (picture 3), however there is no necessity in chlorine supply, adsorptive feed treatment and caustic treatment of hydrocarbon gas.