Limitation of using aromatic concentrates such as reformate causes necessity of searching alternative ways of getting high-octane autocomponents in high-octane gasoline production. One of these ways is skeleton isomerization of paraffin hydrocarbons C7H16 to high-octane multibranched paraffins. 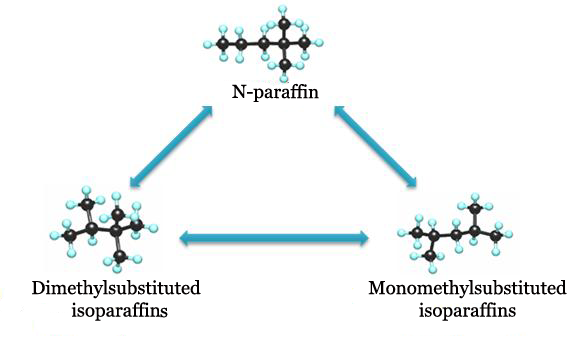 Isomerization catalysts used for C5-C6 paraffin hydrocarbons turned up to be non-effective for C7 fraction isomerization because of the high cracking activity at n-heptane isomerization.

At the present time extensive researches of catalysts development for this process are being done.

C7-hydrocarbons isomerization catalysts must have high acidity and hydro-dehydrogenate characteristics therefore must be bifunctional.

In 1996 Andrew P.E. et al. suggested a carbonaceous catalyst for n-heptane isomerization on the base of molybdenum oxide. This catalyst has high resistance to sulfur compounds and does not require feed treating, however it has low activity in isomerization reactions because of low acidity.

Fluid catalysts (ionic liquids that are not easy-to-use in operation in spite of its efficiency in isomerization reaction) have been explored. Section for separation of reaction products and ionic liquid, as well as its decontaminating block are necessary while using fluid catalysts.

Halogenated alumina catalysts became widespread in C5-C6-fractions isomerization. Their disadvantage is a low resistance to sulfur, nitrogen and moisture traces. Sulfur and water content in feed and hydrogen must be less than 1 ppm and maximum nitrogen content is 0.1 ppm. These requirements cause necessity of not just deep hydrofining but also feed and hydrogen extra fine drying. Moreover, for chlorine loss compensation continuous delivery of considerable amount of chlorine organic compounds is required, that causes increased equipment corrosion and necessity of acid wastes utilization. The main disadvantage of chlorinated catalysts at C7-fraction isomerization is their high cracking activity.

Recently tungstated zirconia as a perspective material for production of solid acidic catalysts for linear alkanes isomerization has been attracting attention of the researchers.

The most active zirconia form is tetragonal. It can be transformed to monoclinic structure in case of high temperature and zirconia species may sinter. Tungsten species stabilize crystalline zirconia at the tetragonal phase and prevent sintering.

The patenting dynamics is shown in the picture 1, which demonstrates increased activity in regard to development of catalytic systems and C7-fraction isomerization process in 2004. In 2006 the amount of claimed inventions decreased, however, judging by published articles at this period of time (publishing dynamics is shown in the picture 2), interest in these developments does not decrease. 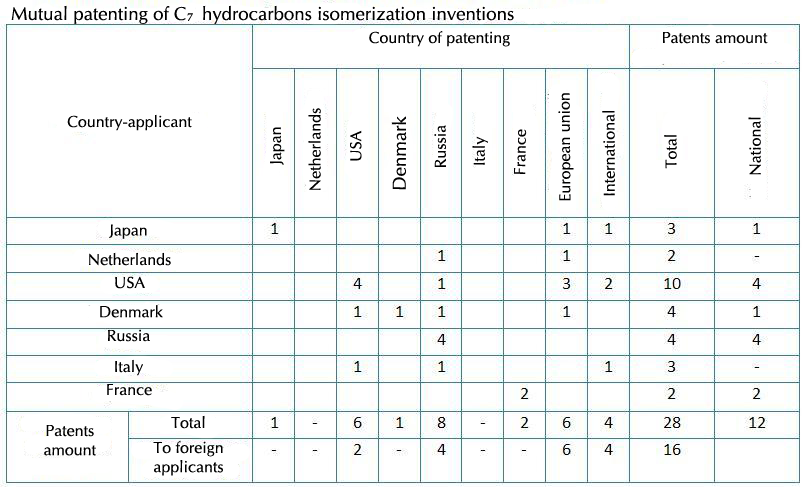 Data of mutual inventions patenting are shown in the table above. The table shows that the biggest catalyst and C7 hydrocarbons isomerization technology product market belongs to European countries, Russia and the USA. The USA and Russia are the most active countries in new solutions development. They applied for invention patents to national patent offices for 4 times each.

Italy is developing the catalyst on the base of III-IV groups metal oxide (mainly Al and Zr, more often – sulfated Zr dioxide).

Denmark is patenting the ionic fluid catalyst with metal salt as an additive or without it.

Companies of France suggest the catalyst on the base of Al oxide with impregnated phosphorus and tungstate nitride.

US developments are more diverse: along with C7-C8-fractions isomerization over such famous catalysts as Pt on the base of chlorinated and fluorinated Al oxide (RU №2012395, US №3078323) scientific researches are conducted as to creating catalysts on the base of sulfated Zr oxide (Russia and Italy), but for catalyst granules strength and activity increase, promoted with such metals as Fe, Mn, Co (EP №0408318), Ni, Co, Mo, Cu (US №5866748), Mn, Ni, Fe (EP №1002579).

The catalyst containing noble metal of VIII group on γ-Al2O3 and compound of Al and hydrocarbon substituent is described in the patent of the Netherlands.

Japan is running development of the Pt catalyst on the base of tungstated Zr oxide. The USA has the patents for tungstated Zr oxide (US №5382730, № WO 95/02262) as well. They use this composition as the catalyst for opening rings of cyclic hydrocarbons.