The light gasoline fractions isomerization process has become the most popular process among all other processes for motor gasoline components production. It is conditioned by several factors (table 1).

In countries, where petroleum refining is technically developed, isomerization process always has been very important. However, after introduction of stringent ecological standards for benzene and aromatic hydrocarbons contents in motor gasolines, the requirements to isomerization technology have been significantly raised and consist of the following: 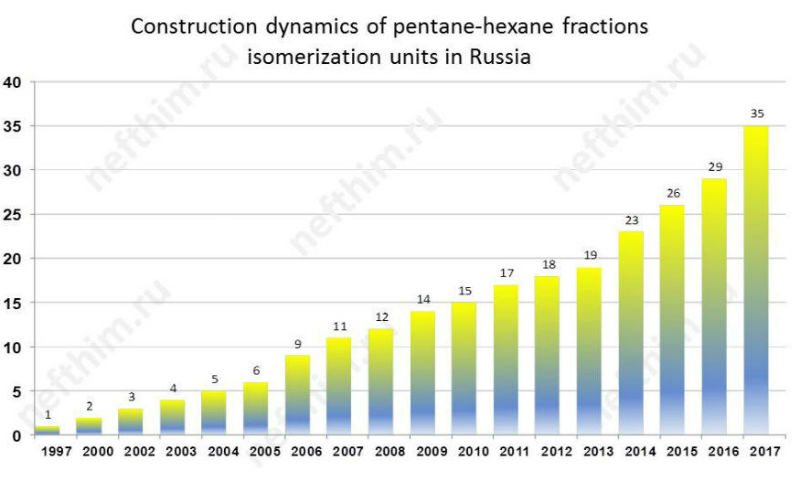 This question is becoming more relevant in the modern society.
Automobile transport causes irreparable damage to the environment. In Russia different motor vehicles produce 35 million tons of polluting emissions: 89% is accounted for automobiles, 8% - for railways, 2% - for aircraft transport, and 1% - for water transport.

Nowadays national average share of motor vehicles emissions of total volume of atmospheric air pollution is 43%, but in Moscow – two times higher. Ecologically unfavorable areas occupy about 15 percents of country territory, where about 70% of population lives. Nitrogen and carbon oxides and other hazardous substances concentration level is 10-18 times higher than maximum allowable concentration in the streets of major Russian cities.

Main part of harmful substances emissions into the atmosphere is generated by exhaust gases of combustion engines. So, every year only one motor vehicle adsorbs at the average more than 4 tons of oxygen from atmosphere, releasing about 800 kg of carbon oxides, about 40 kg of nitrogen oxides, and almost 200 kg of different hydrocarbons with exhaust gases. Engine exhaust gases contain complex mixture of more than two hundred components, there are a lot of carcinogens, for example, lead oxides, tetraethyl lead, etc.

To ecological problems solving, the measures have been taken to control harmful substances emissions of automobile exhaust gases into the atmosphere practically in all advanced nations of the world, and ecological properties of the transport on the engineering stage rank with its consumer performances and safety. Thus, at this time, Euro-4 standards that have significantly tightened regulations to maximum allowable concentrations of hazardous substances in vehicle exhaust gases over the past 10 years have been put into effect in the USA and the European Union.

Introduction of EURO-4 standard on the way towards the creation of environmentally friendly fuel has fully proven its environmental protection effectiveness (Fig. 1). According to the European Commission data over a period from 1995 to 2010, the average content of CO, nitrogen oxide (NOx), and lead compounds in the exhausts of vehicles, used on the territory of EU, is decreased by more than 4 times, and the content of hydrocarbonates and volatile organic compounds (VOC), sulfur gas and benzene – more than 5 times (Fig. 2).

Russia is significantly behind in the ecologically clean fuel problem solving, it is demonstrated in Table 1a. 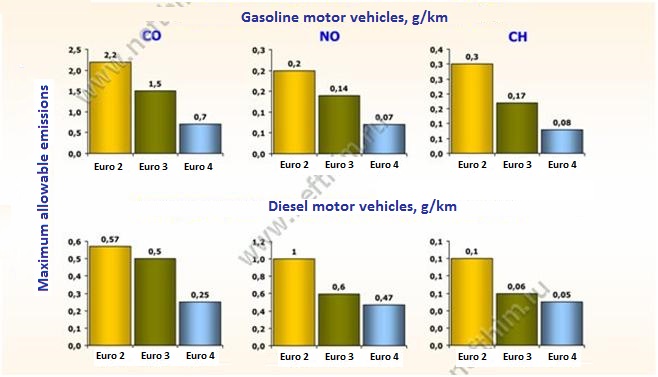 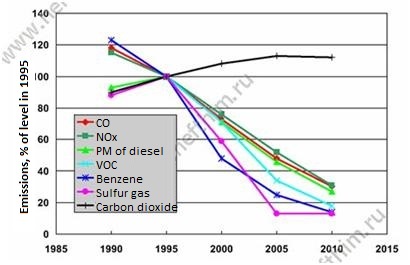 Requirements to ecological purity of motor fuel in Russia are controlled by special technical regulations “On requirements for automobile and aviation gasolines, diesel and marine fuels, jet fuel and fuel oil", which were approved by Russian Government Regulation No. 11 dated February 27, 2008.

Regulations set mandatory requirements for environmentally friendly fuel, complying with the Directives of the European Parliament and of the Council 2003/17/EC and 98/70EC (the so-called Euro-2, 3, 4, and 5 standards). Technical Regulations establish minimum allowable chemical and physical parameters of motor gasoline and diesel fuel (see Table 2), as well as terminal date of fuel production of one environmental class or another. 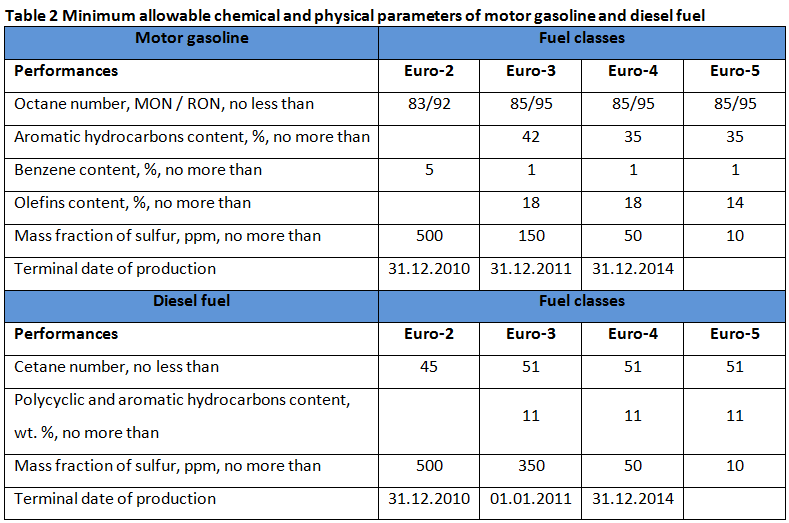 Forthcoming entering into force of the technical regulations requirements, meeting Euro-4 and Euro-5 specifications, objectively and seriously has motivated to increase the volume of investment for main processes revamping on Russian refineries.

In order to ensure a radical improvement of motor gasoline fuel quality, the following problems should be solved:

Currently, compliance with European standards for motor fuel, presented on the Russian market, is ensured due to special antiknock component, used by manufacturers, i.e. methyl tertiary butyl ether (MTBE). Also this additive is widely used in the EU countries and has a positive effect on engine: oxygen, contained in MTBE, ensures complete fuel combustion and thus reduces CO and CH emissions. However, enhanced MTBE content leads to power reduction, growth of nitrogen oxides emissions and accelerates corrosion process, therefore, according to European standards, MTBE share should not exceed 15%. Furthermore, MTBE is a very expensive component, and its application has an adverse effect on price characteristics of gasoline, produced under European standards. It leads to increase of cost in comparison with that of conventional high-octane gasoline by 10%.

The target product of isomerization unit is isomerate that is free of benzene and other aromatic hydrocarbons, olefins, sulfur, nitrogen, and heavy metals, and that has the octane number from 83 to 92 RON depending on the process flow diagrams (PFDs).

Thus, currently, isomerization of light gasoline fractions is one of the most in-demand processes, ensuring the production of environmentally clean motor gasolines. The extensive industrial experience in application of different technologies and PFDs has been gained, but the improvement of catalysts and technologies is constantly being proceeded.

In the XXI century, the isomerization technology based on sulfated oxide catalysts is becoming more popular.