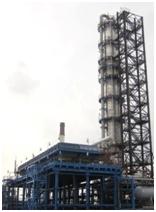 The unit in JSC Ufaneftekhim is the first commercial unit where Isomalk-2 technology for C5-C6 fractions isomerization process was introduced. The unit was started up in October 2003. Initially L-35-5 reforming unit was converted for isomerization process according to “once-through" scheme with pre-hydrotreatment at L-24/300-1 unit. Given the high space velocity (3.5-4.0 h-1), this unit produced isomerate with 79-80 RON in the amount of 300 KTA. Conversion included re-piping of isomerization feed furnace; “quench” line installation, addition of recycle hydrogen gas drying section with NaA type adsorbent (consists of two drying adsorbers and furnace for adsorbent regeneration), SI-2 catalyst loading into 2 reactors.

In June 2008, the unit was revamped to increase feed capacity and convert to scheme with unconverted hexanes recycle.

In August 2011, SI-2 catalyst was regenerated and additional quantity of fresh catalyst (6.5 tons) was loaded to reactor R-3.

In December 2012, the unit was revamped, including additional equipping with deisopentanization section for recovery of isopentane fraction (overhead product) and pentane fraction (side cut) as well as construction of new furnace P-1 with one pass heating upstream of reactor R-1. 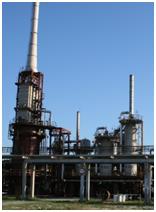 In August 2005, the unit was converted to Isomalk-2 technology over SI-2 oxide catalyst. The revamp involved replacement of zeolite catalyst with low-temperature oxide catalyst SI-2, implementation of scheme of make-up hydrogen gas supply through a dryer, “quench” line installation, re-piping of the dryer from compressors discharge to suction, and construction of new hydrotreatment section for feed pre-hydrotreating.

The conversion of isomerization unit to SI-2 catalyst allowed decreasing the process temperature to 130-140 °С and increasing “once-through” isomerate octane number up to 83 RON that is 6 numbers higher than zeolite catalyst performances. 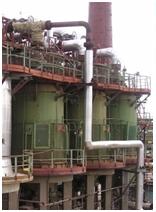 In 2008, the unit was revamped that involved regeneration of KGM-70 hydrotreating catalyst and equipment replacement in hydrotreatment section because of physical depreciation.

In 2012, the unit turnaround was performed without SI-2 catalyst regeneration.

Due to the commissioning of the new isomerization unit with higher capacity, this unit was shut down. Total service time of SI-2 catalyst at this unit was more than 12 years.

The conversion of isomerization unit to SI-2 catalyst allowed increasing the isomerate octane number by 7-8 numbers that significantly enhanced operating efficiency of KINEF, LTD. and made it possible to start producing gasolines of high ecological class. During 12 years of operation, the catalyst was not regenerated, whereas isomerate octane number at the end of 12-year run was 82 RON. 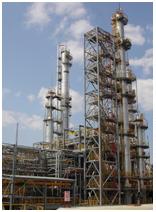 In December 2006, pentane-hexane fractions isomerization unit that had been operated earlier over LPI-100 catalyst according to Par-Isom technology was reloaded to SI-2 catalyst without revamp. The catalyst was replaced in two reactors. The unit is being operated according to Isomalk-2 technology with feed deisopentanization and low-branched hexanes recycle. The unit capacity is 180 KTA. RON of isopenatane fraction is 93, RON of isomerate is 86-87.

The unit conversion to Isomalk-2 technology allowed increasing the octane number of isocomponents mixed fraction by 3-4 RON and proved high activity of SI-2 catalyst as compared with analogous oxide catalysts.

In February 2013, the unit was shut down for turnaround with isomerization reactors replacement, therefore the catalyst was regenerated. The time period from the start-up to the first regeneration was 6 years and 2 months.

At the present time, the unit is still in operation. 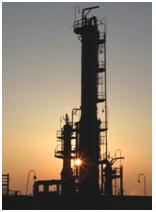 Isomerization unit at Novo-Ufimsky Refinery represents section 300 of L-35-11-1000 unit, converted to isomerization process in 1997. Initially the unit was started up according to “once-through” scheme, and isomerization process was performed over zeolite catalyst. Hydrotreatment was performed in section 100 (feed treatment section of L-35-11-1000 unit). At the first stage, the revamp was limited to re-piping and reloading the reactor section. Subsequently, the unit was additionally equipped with deisohexanization column.

The unit conversion to SI-2 catalyst allowed achieving the isomerate octane number of 87-88 RON, which is 7-8 numbers higher than that of zeolite catalyst.

You can connect or consult with us regarding isomerization unit operation at your refinery via contact form or by telephone: +7 861 203 20 20