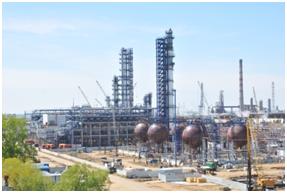 The unit design and construction were performed in a uniquely short period - 3 years. This became possible because detailed engineering documentation elaboration and order of long-lead equipment were carried out as early as during designing stage. Moreover, design engineering was not suspended even despite difficult economic situation in the country. 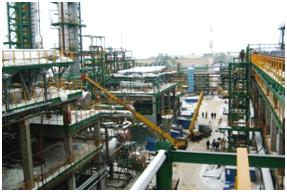 The unit was designed by JSC Neftechimproekt, Russia, Saint-Petersburg. Design Basis for the unit was issued by SIE Neftehim, LLC in 2007. The first construction stage had been completed by 2009. SIE Neftehim, LLC performed author control and approved Design and Detailed Engineering Documentation for equipment, as well as Process Operating Procedure for the unit. Equipment procurement and the unit construction had been completed by August 2011.

The unit was started up in October 2011. 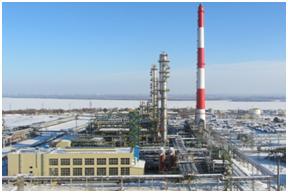 In view of the necessity to bring commercial motor gasolines quality into compliance with Euro-4 the refinery management made a decision to introduce isomerization process. Feed of the isomerization unit pre-hydrotreatment section is straight-run IBP-70°С fraction from gasoline re-distillation section at Crude Desalter-CDU.

Design Basis was developed by SIE Neftehim, LLC in March 2008. In 2008, JSC Neftechimproekt completed FEED stage. The whole design process was carried out under strict control of SIE Neftehim, LLC.

Feed unit capacity is 300 KTA. Isomerization process is implemented according to the scheme with feed deisopentanization, n-pentane and low-branched hexanes recycle. The unit produces isocomponent with octane number of 91.5-92.5 RON. The catalyst has not been regenerated. 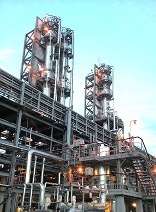 In September 2016, small-scale isomerization unit Isomalk-2 was started up. The design works were carried out by Lukoil-Nizhegorodnefteorgsintez Ltd.

The unit was designed and constructed with the participation of SIE Neftehim, LLC. The unit composition includes hydrotreating section and fractionation section. Hydrotreated fraction (IBP-70 °C) is isomerized according to the scheme with low-branched hexanes recycle to produce isomerate having no less than 88 RON. 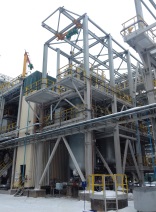 In March 2018, another successful start-up and commissioning of the new isomerization unit according to Isomalk-2 technology took place. It was designed under SIE Neftehim, LLC license. The unit capacity is 420 KTA of mixed feed.

The light naphtha isomerization unit of section 1800 of JSC TANECO was constructed without using foreign-made equipment. The Basic Engineering Design of the unit was developed by SIE Neftehim, LLC. All operations, including catalyst loading, start-up, commissioning and test run, were performed with the direct participation of SIE Neftehim, LLC experts.

According to the test run results, the commercial isomerate octane number was 92.5 RON, whereas the guaranteed value is ≥ 91.2 RON. The isomerate yield is more than 99.0 wt. % on the reactor section feed.

You can connect or consult with us regarding isomerization unit operation at your refinery or request a proposal for design and construction of a new unit via contact form or by telephone: +7 861 203 20 20