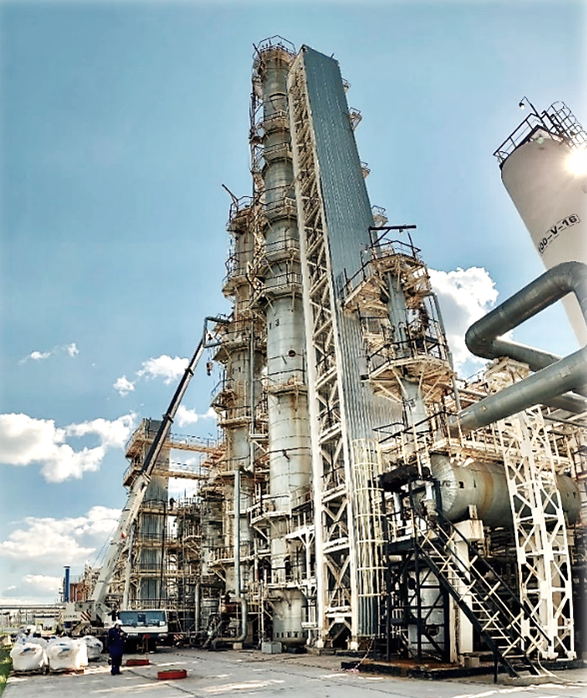 The result of several years of research conducted at SIE Neftehim, LLC was the isomerization unit transfer at the Achinsk Refinery from a chlorinated catalyst to SI-2 catalyst in July 2021.

The SI-2 catalyst is a well-known development of SIE Neftehim, LLC and it is constantly being improved, due to that, it became possible to replace the chlorinated catalyst with SI-2 catalyst, 18 years later from the time of the first industrial experience, without the unit revamp.

SIE Neftehim, LLC produced and supplied the catalyst within a short time. The company’s specialists performed supervision operations during SI-2 catalyst loading and start-up operations and further commissioned the unit to the normal process mode.

The catalyst replacement made it possible in a short time to obtain a final isomerate of the required quality with octane number of more than 87.7 RON.

The rejection of the chlorinated catalyst allowed the Achinsk Refinery to eliminate the application of expensive chlorinating agent, caustic and chemically purified water. The caustic supply sections and the caustic scrubber have been decommissioned, the problems associated with the process equipment corrosion have been solved, and the caustic wastes have been eliminated.

The high resistance of SI-2 catalyst to the catalytic poisons and impurities allowed the Achinsk Refinery to reduce the turnaround period and ensure the production of commercial gasoline in the shortest possible time.

Due to the high activity of SI-2 catalyst, the yield increase of high-octane isomerate by 9-12% was ensured compared to the chlorinated catalyst operation, which allowed the Refinery to increase the high-octane gasoline production meeting the modern environmental standards.